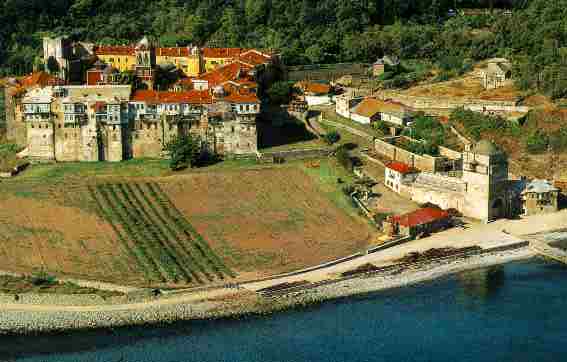 The monastery of Iveron is located on the northeast side of the peninsula. The monastery was founded in the last quarter of the tenth century by John Tornikipos, a courtier of David the ruler of Iberia (Georgia). The 16th century had been a period of prosperity for the monastery, and, as result, it had been decorated with splendid painting works.

It occupies the third rank in the hierarchical order of the twenty Athonite monasteries. It is inhabited by 61 monks (1990) and until a few years is coenobitic (communal).

Its katholikon was first built in the first half of the eleventh century and was restored in 1513. It is dedicated to the Dormition of the Blessed Virgin Mary. It follows the typical plant of the Athonite church. The church?s interior was decorated at times from the 16th century to the 19th with magnificent frescoes. Its wood-carved iconostasis dates back to the 18th century.

Except the Katholikon there are sixteen chapels within the monastery. Two of the them, this of Saint Nicholas and that of the Archangels lie in the eso-narthex. Into the courtyard are two chapels. Near the gate of the monastery is the chapel which houses the thaumaturgical icon of Virgin Portaitissa. To the east is the chapel of Saint John the Baptist.

In front the entrance of the Katholikon lies the Phiale for the blessing of the waters reconstructed in 1865 and opposite of the church stands the refectory.

The library is one of the richest in Mount Athos, containing more than 2,000 codices and 15 liturgical scrolls, 100 manuscripts and 15,000 printed books. The library also contains several important imperial and patriarchal documents.

For Priests or Parish Council Officers Services for the Монастырь

If you are a Priest or Parish Council Officer of this Монастырь you may use the following services:

Take a moment to update the listing details of Iviron Monastery, Mount Athos, Chalkidiki, add photos as well as include information on your services and historical data so that the Монастырь listing is complete; your parishioners can better communicate with you and know more about the Монастырь!

Create and publish a list of items that you need for your Монастырь. As a Монастырь Representative, you are aware of religious items that the Iviron Monastery, Mount Athos, Chalkidiki truly needs. The Lighten a Church service enables you to create a list with what you need for the Монастырь; once there is a prospective donor who wishes to help, he or she can purchase an item or more from your Need list on Монастырь's behalf.

Create Holy Causes for funding of your Монастырь's Christian projects and endeavours. Support a Holy Cause is a new service empowering your parishioners and followers to connect virtually with Iviron Monastery, Mount Athos, Chalkidiki and support specific Christian endeavours such as Philoptochos and Монастырь Renovation in an easy and secure way. As a Монастырь Representative, you can create one or more Holy Causes and start getting funding for your Монастырь projects. 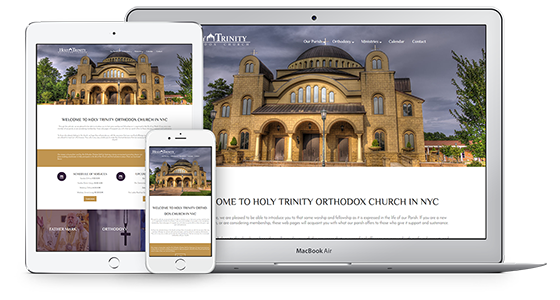